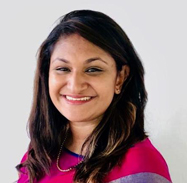 Manisha is the Finance Business Partner of Dilmah Ceylon Tea Company. She and her team are responsible for partnering with several divisions in order to provide strategic information to the top management. She is the first to perform a partnering role at Dilmah and her role has evolved over the years to provide key information to board including working with consultants to look at the prospects of using AI (Artificial Intelligence) to facilitate pre-emptive decision making within the organization.

Leaving Ladies’ College in 2008, Manisha’s work experience spans over 3 different industries where she started her career at Citibank and then went on to MAS Intimates before joining Dilmah Ceylon Tea Company. She is an associate member of the Chartered Institute of Management Accountants – CIMA (UK) and has completed Chartered Financial Analyst Exams (CFA) on her first attempt over a period of 2 years.

During her school years she excelled academically and in sporting arenas. Whilst achieving best results for London advance level exams and winning several prizes she was also awarded colors for multiple sports namely netball, swimming and water polo. She then went on to be the first Sri Lankan Women’s National Water Polo Captain and won the bronze medal at the 11th Asia Pacific Championships held in Hong Kong in 2009. She continued to balance her studies, career and sports by playing water polo for the Sri Lanka Navy water polo women’s team and then represented Sri Lanka again as the vice-captain in 2013 at the Asia Cup tournament held in Singapore.