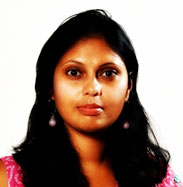 Manohari is the Head – Strategic Business Development of Hayleys PLC, and Director of Hayleys Group Services Ltd. She is responsible for the Hayleys Group’s acquisitions into new business forays completing transactions exceeding US$200Mn.

An Alumnus of KPMG, Manohari is a Fellow of the Chartered Institute of Management Accountants -CIMA (UK) and a Fellow of The Institute of Chartered Accountants of Sri Lanka(ICASL).She read for MBA from the University of Colombo topping the batch winning three gold medals. Her first degree is in Biology (First Class Honours) from University of Colombo.

A CIMA Prizewinner at CIMA Finals- Strategic Financial Management, Manohari was adjudged as the CIMA Young Star (Silver) at the maiden CIMA Janashakthi Pinnacle Awards.  She was featured in CIMA Insight UK magazine in Dec 2011 on “Breaking the glass ceiling in Sri Lanka.”

Manohari has served as a Board Member of the International Chamber of Commerce (SL) over the last 5 years.

She had Executive Education at the Indian School of Business Hyderabad, and has attended workshops relating to finance in BHF Bank, Frankfurt -Germany and Asian Development Bank–Manila- Philippines.

Manohari was selected to represent Sri-Lanka in the prestigious International Visitor Leadership Program (IVLP) by the State Department, United States of America in September/October 2014.

In Aug 2015, Manohari was awarded the AOTS Scholarship from HIDA Japan to represent Sri Lanka in the flagship program Global Executive Program on Corporate Management.

Manohari is also a visiting lecturer at the University of Colombo Masters of Business Administration Degree program. A journalist, her articles on strategy has been featured in Daily FT /CIMA Edge/Chartered Accountant/ PIM etc. She has also been a speaker and panelist at numerous events.