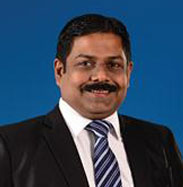 Sivakrishnarajah Renganathan who has served Commercial Bank throughout the entirety of his career for more than 37 years and has held several key positions in the Bank.

In July 2003, he led the Bank’s acquisition of the Bangladesh operations of Credit Agricole Indosuez (CAI), Commercial Bank’s first ever acquisition of a banking operation, and was appointed Country Manager – Bangladesh, in which capacity he led the Bangladesh team of staff over a five year tenure, building up the Bank’s operations in Bangladesh. On his return to the country, he was appointed as the Bank’s first Chief Risk Officer (CRO) and was responsible for preparing and implementing the Bank’s Integrated Risk Management Policies.

In April 2011, he was appointed as the Deputy General Manager – Personal Banking Division, with overall responsibility to manage the Bank’s entire branch network.

He was appointed as the Chief Operating Officer and an Executive Director of the Bank Board in July 2014.  Subsequently has been appointed to the pivotal role of Managing Director/ Chief Executive Officer of the Bank with effect from July 27, 2018.